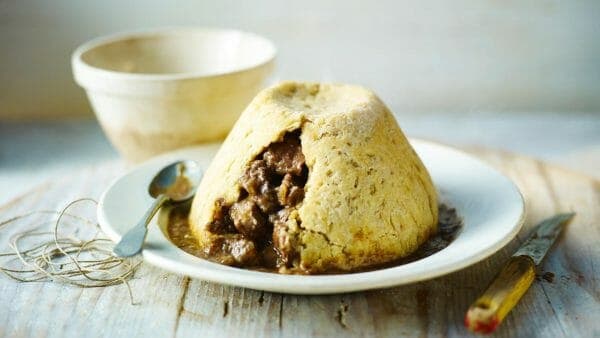 Steak and kidney pudding, a traditional British dish consisting of diced steak, onion, and kidney—generally from a lamb or pig—cooked in a brown gravy and then encased in a soft suet pastry and steamed for several hours. Mushrooms and bacon are sometimes added to the meat, and stout or other types of ale may be mixed with the gravy. Since then steak and kidney pudding has become one of Britain’s national dishes. It is known by various rhyming slang names, including “Kate and Sydney Pud.”

The first recipe for steak and kidney pudding to appear in print came from Sussex, in a book by Mrs Beeton published by Ward, Lock and Tyler in 1861.

While the pudding steams, the seasoned meat and onions mingle, creating a tempting, fragrant pool of gravy.

Traditionally served with mashed potatoes and green peas, this is cold-weather food at its best. The suet-crust pastry is substantial and very filling and the most appetising aroma fills the kitchen when you turn out the pudding and cut it open. It’s also one of those dishes that leave you free to do other things around the house while it cooks. And it’s good-natured enough not to mind if you leave it 10 minutes too long … as long as there’s water in the pot, that is.

And far from being regarded as a culinary fossil, steak and kidney pudding is reappearing on the menus of pubs across the country. Served with mashed potatoes and steamed vegetables, it makes a warming, filling dinner.

Unlike most other pastries, which are baked, suet crust is usually boiled or steamed and works well for both sweet and savoury dishes. According to Mrs Beeton, the pastry can also be baked, but in the process loses some of its richness.

Suet crust pastry is made from suet, flour, salt and water. It always contains baking powder as a raising agent. Self-raising flour works well when making this pastry, or you can add 4 tsp of baking powder to any 450g / 1lb of plain flour.

Suet can be bought in ready-to-use packets or fresh from the butcher. When using fresh suet remove the skin and shred the suet finely before using.

There are recipes for steak and kidney pudding the length and breadth of England and not two of them are alike. The only things they have in common are suet crust pastry, stewing steak and kidneys.

Of course, you can always cheat and buy one from Waitrose.

You don’t need much in the way of equipment to make a traditional steak and kidney pudding, but for best results, you’ll want a decent pudding basin or steamer.

Jump to our featured recipe