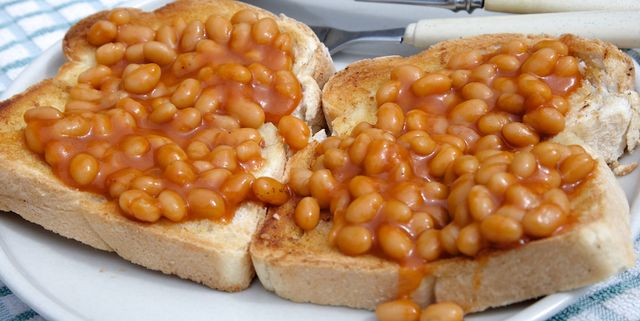 Beans on toast have been a British staple for years. Eaten for breakfast, lunch or dinner, it’s simple, delicious and very comforting.

We Brits love our beans on toast, but if you are outside the UK you are probably wondering what on earth are we on about?

Surprisingly, (affiliate link)Heinz baked beans have been around since they were launched in Pittsburg, the USA in 1895. It wasn’t until 1904 that they made it across the pond to the UK, first going on sale in Fortnum & Masons as a premium brand.

When Fortnum & Masons started selling Heinz beans, the can opener had not yet been invented so their advice to consumers was to stab it with a knife!

Until 1928 beans were imported from the US but they were so popular that Heinz opened a factory in London and beans on toast were marketed in the UK as a wholesome economical meal. During WWII Heinz beans had become such an essential part of the British diet that they were declared exempt from rationing.

More tins of beans are consumed in the UK than anywhere else in the world. We get through a staggering 1.5 million cans a day!

Beans on toast is a very versatile meal and you can jazz it up in any number of ways. A popular addition is to grate some cheese on top, my wife’s favourite.

I like spicy food so personally, I add a splash of Nando’s medium sauce while warming the beans to give them a bit of chilli warmth.

During WWII American GI’s liked their beans served with some caramelised red onions. That sounds like a really good idea and I’m going to try that.

My nephew likes his food really spicy and makes up his beans with garlic, ketchup, brown sugar, cayenne pepper, smoked paprika and diced jalapenos. He uses the same mix for a spicy bean bake or for some “very lively” beans on toast.

(affiliate link)Heinz beans are sold in 69 countries around the world so it’s not just us Brits that love them!

Heinz’s factory in Wigan, Lancashire is the largest food factory in Europe and produces a whopping one billion cans a year from single portion cans up to a (affiliate link)catering size can of 2.62kg.

Many other versions of baked beans are available from supermarkets’ own brands to competitors like (affiliate link)Branston, but in my opinion, none of them compares to Heinz.

You can even make your own from (affiliate link)raw haricot beans, but I wouldn’t recommend it. The results never seem to have that smooth richness of the Heinz ones.

So now you know the when, why and how of this classic British delight, try making some for yourself. Toast the bread, warm the beans, make a cup of tea and enjoy. Tottenham Cake
No ratings yet
A tray-baked sponge cake topped with very sweet, pink icing
Check out this recipe

Why do we Brits eat beans on toast?

Heinz claims they invented beans on toast in 1927 for an ad campaign. They have remained popular in the UK since World War II. They are a cheap meal and really good for you!

Is it true that baked beans give you excess wind?

Yes. I can personally vouch for it as my family will testify.

Which type of bean are baked beans made from?

Baked beans are made from a type of haricot bean called navy beans, native to South America.