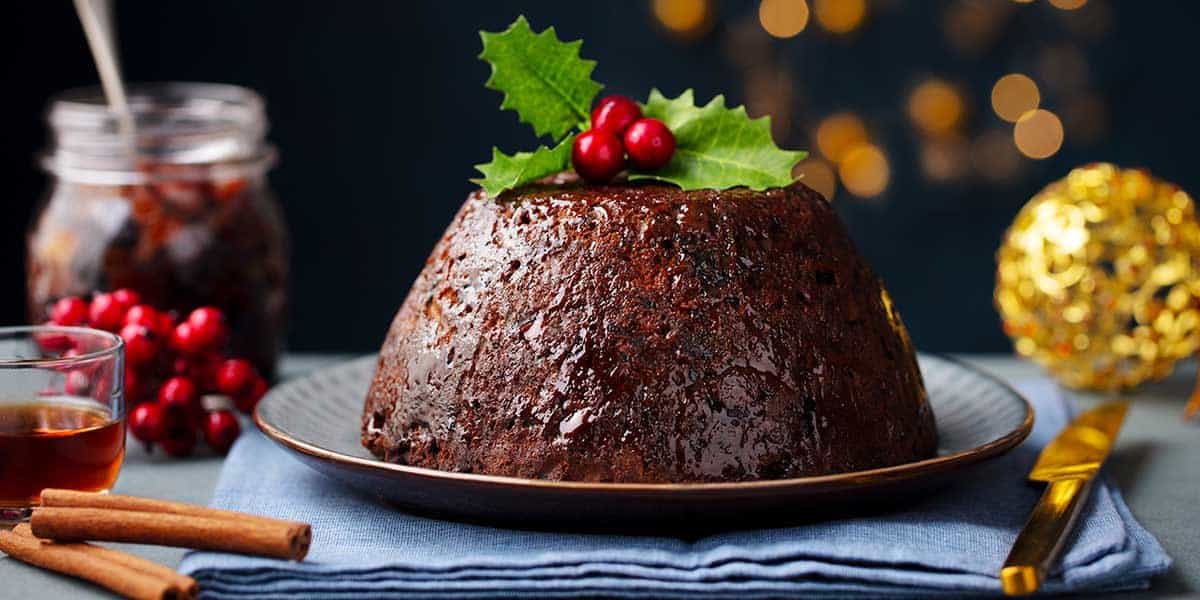 There are more Christmas pudding recipes on the web and in cookbooks than you can shake a stick at, as the old saying goes.

The most often quoted ones seem to be those from Mary Berry and Jamie Oliver. My featured recipe is the one my eldest son uses. He doesn’t remember where the original came from but he has tweaked it to our families preferences over the years.

All I can say about it is that it tastes fantastic and is the highlight of our Christmas meal.

For many British households, Christmas dinner has to end with a slice of Christmas pudding topped with brandy butter or in my house, lashings of hot custard.

Today’s pudding bears little resemblance to the original 14th-century porridge known as frumenty. This concoction of beef, mutton, raisins, wine, currants and spices would be eaten on the run-up to Christmas while all the preparations were underway.

King George I was a fan of plum pudding as it was now known, although it rarely if ever contained any plums?

By 1714 the pudding was firmly established in British society and by Victorian times it evolved into the pudding we know and love today.

Things have moved on thankfully from the historical use of minced meat (that’s where the term comes from), thank the Lord.

The mix of ingredients we now use does actually make a dessert and not the main course.

During the inter-war years Christmas pudding was promoted by the British media as a symbol of the British Empire.

Ingredients imported from across the imperial assets of the British crown were collated into a recipe by the King’s chef to promote trade.

There are many traditions associated with the making of a Christmas pudding. Most are religious, some are practical and a few were pure superstition.

Pudding making should commence 5 weeks before Christmas on the last Sunday before Advent, known as stir up Sunday.

Each family member should stir the pudding mixture 3 times while making a secret wish. It should be stirred using a wooden spoon, symbolising the manger, rotating east to west, for the three wise men’s journey.

A coin, usually a silver sixpence, (that’s pre-decimal for you younger readers) should go in the mix. Whoever finds it in their serving would have good luck for the following year. Decimal UK coins are made from various combinations of copper, zinc and nickel which is not safe to bake plus they go green.

The pudding should have 13 ingredients representing Jesus and his twelve disciples.

Don’t forget the unmarried with the pudding stirring. Superstition has it that they won’t find a partner in the coming year if left out.

Why do we set fire to our Christmas pudding?

It is supposed to represent the Passion of Christ with the sprig of holly representing the crown of thorns.

If you do plan to flambe your pudding, heat the alcohol gently first before pouring it over the warm pudding. Trust me, it makes it much easier to light without resorting to a blowtorch.

Whether you make your pudding on stir up Sunday or well before, you need to ‘feed’ it while it matures. Just like Christmas cake, the addition of alcohol, usually brandy, or even Armagnac, my particular favourite, at regular intervals helps things along.

Traditionally, Christmas pudding is served with brandy butter but I like custard.

My wife has to have double cream on top with a mince pie on the side. The grandchildren invariably want ice cream. Lately, the daughters-in-law have asked for creme fraiche.

There are some really good ready-made puddings out there as well as some pretty mediocre ones.

I know not everyone has time to make their own but try if you can, you won’t be disappointed. For the Brandy Butter

For the Brandy Butter:

Christmas Carrots with Herb Butter
No ratings yet
The idea behind these Christmas carrots is to make one part of preparing Christmas dinner quicker and easier.
Check out this recipe