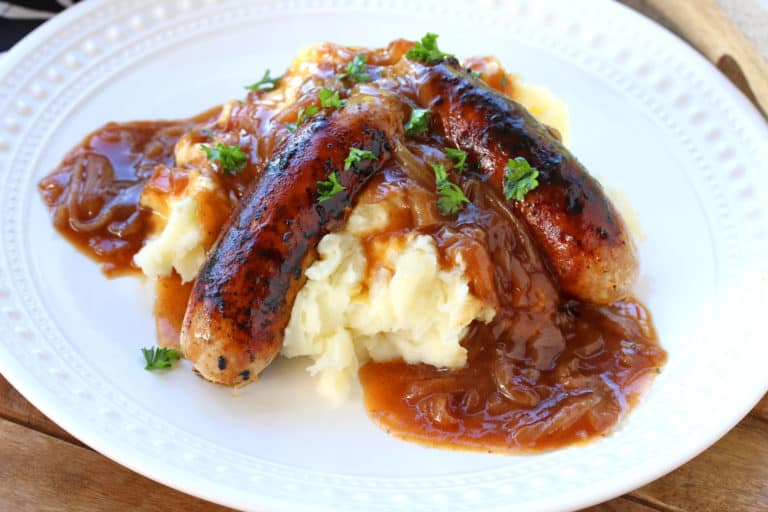 Our Bangers & Mash consists of Cumberland sausages served with mashed potato and onion gravy. Traditionally served in pubs, a recent survey ranked it as Britain’s most popular comfort food.

Sausage Bangers surfaced during WWI and became even more widespread during WWII. Meat was in short supply and rationing meant sausages were made with inexpensive fillers like rusk or breadcrumbs. However, large amounts of water in the mix would result in the sausages bursting with a “bang” when fried. “Bangers” stuck and is still in use today.

Pricking sausages with natural casings has two benefits, firstly it allows the steam to escape. Secondly, it also means excess fat can drain away.

Being probably the most famous of British sausages, Cumberland’s have been a regional speciality for over 500 years. Because they are made using chopped rather than minced meat, Cumberland’s have a distinct taste and a coarse texture.

Absorbed into Cumbria in 1974, Cumberland as a county no longer exists. Sandwiched between Lancashire in the south, Scotland in the north and facing the Irish sea, it contained the Lake District, one of the most picturesque areas of the UK.

Since being granted Protected Geographical Indication (PGI) status in 2011, Cumberlands are a treasure of the British sausage industry. This helps to protect their heritage and authenticity in a world of fake sausages from overseas.

Find more information on British sausages at A Guide to British Sausages.

The perfect accompaniment to bangers and mash is my great onion gravy. 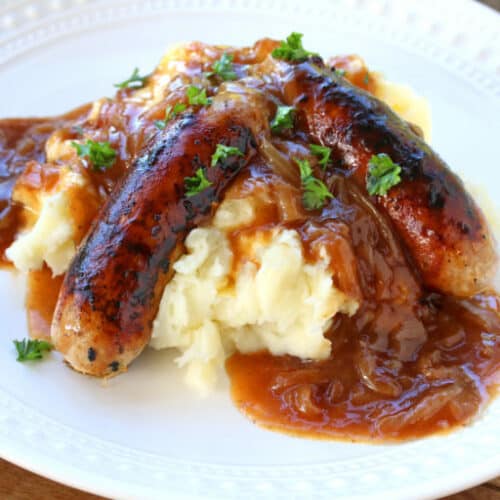 Grandads Onion Gravy
Grandads onion gravy is a legend in my family. It goes great with Sunday roasts, sausages and pork chops.
Check out this recipe

Pie and mash
Minced beef and onion pie, served with mashed potato and parsley licquor.
Check out this recipe