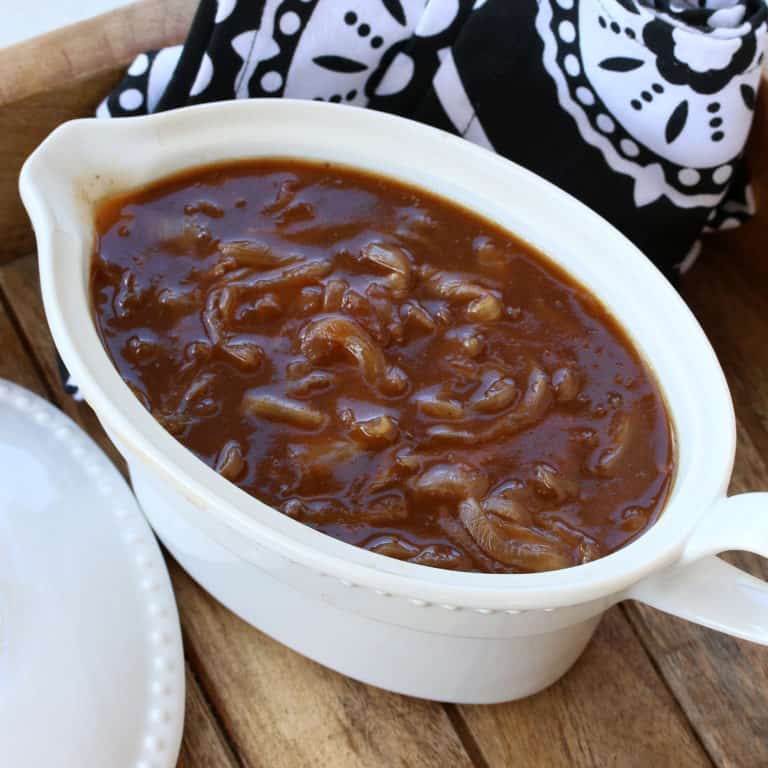 Grandads onion gravy is a legend in my family. It goes great with Sunday roasts, sausages and pork chops.

Making this gravy takes a bit longer than usual, so I only tend to make it when we have the family round for dinner, but it is well worth the effort.

No, I’m not talking about which bottle of wine you should open when cooking dinner. It is the choice of brown-skinned white onions or red onions for your gravy.

While brown onions are usually used in cooking, reds are mainly used raw in salads because of their milder, sweeter flavour. Both are really healthy and low in calories. Either variety caramelises well, although sometimes adding a little sugar can help.

I think a gravy made with red onions complements roast pork or chicken where its milder taste doesn’t overwhelm the flavour of the meat. Sometimes all you can taste is the gravy!

Brown onion gravy suits red meats like beef and is a necessity for liver,bacon and onions.

Of course the best dish for onion gravy is Bangers and Mash!

To Roux or Not to Roux

The Roux, a mixture of flour and butter in equal parts, forms the basis of French sauces.

By contrast, British gravy is traditionally made by adding flavouring and thickeners to the juices in the bottom of a roasting tray while the meat is resting after cooking. Bisto is the leading British brand for making gravy this way.

Although not named after them, the Roux brothers, Albert and Michel, came to the UK in the 1960s, despite speaking no English. They were so appalled by the standard of British cooking that they opened their first restaurant Le Gavroche in London’s Mayfair.

Credited with introducing French-style cuisine to London diners, their methods, known to professional chefs the world over, became popular with home cooks through tv cookery programs.

Whether you will decide to use a roux or not, probably depends on how much time you have. Personally, I roux.

Cumberland Bangers and Mash
Succulent Cumberland sausages embedded in a pile of creamy mashed potatoes and drenched in a rich onion gravy.
Check out this recipe