Make your own tasty homemade fish fingers, so much better than shop-bought.

Launched in 1955 the first fish finger in Britain was a resounding success. More than 60 years later the frozen brick of fish is just as popular.

Fish fingers were developed in an old Birds Eye factory in Great Yarmouth by Mr HAJ Scott in the 1950s.

The fish finger is Birds Eye’s staple product and 15 billion have been produced to date.

Introduced to the UK market in 1955 with the sales pitch: “No bones, no waste, no smell, no fuss.” An immediate hit, they sold 600 tonnes in the first year. These days, the figure is closer to 28,000 tonnes. Birds Eye claims that three-quarters of us get our first taste of fish from a fish finger.

Did you know that Birds Eye patented the freezing of fish using chilled air at -45C and pressure freezing cartons of fish in the early 1920s.

Have you tried them in a sandwich? No? You don’t know what you’re missing!

A Deep Fryer is Best

For best results, instead of an oil-filled pan, I use a countertop deep fryer like this one from (affiliate link)Amazon.

The most important benefit of deep oil fryers is the ability to control the oil temperature accurately. This takes away all the guesswork and gives consistent results. 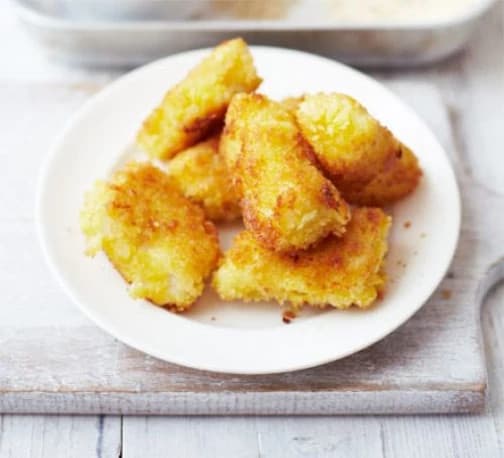 Homemade Scampi
No ratings yet
Homemade scampi is so much better than those from supermarkets.
Check out this recipe