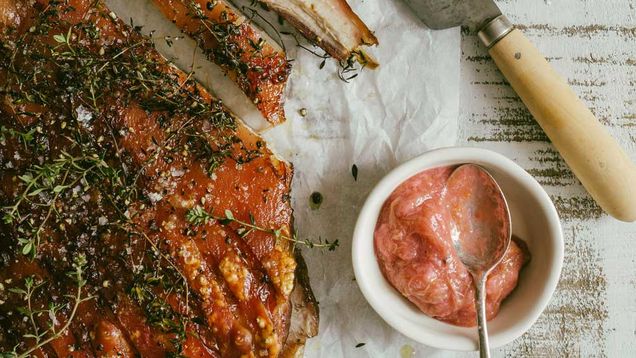 It’s traditional to serve apple sauce with your Sunday roast pork, but have you tried rhubarb and apple sauce or even all rhubarb?

They make a good pairing and this twist on the classic apple sauce goes great with pork.

Rhubarb seems to have gone in and out of fashion over the years. Its popularity seems to have fallen with our increasingly sweet tooth. Times when sugar was in short supply like post-war rationing saw the rhubarb industry collapse.

Most people who grow rhubarb have made apple and rhubarb crumble, if not we have a recipe for you to try.

My son grows rhubarb on his allotment so we have a never-ending supply from late spring into autumn.

We clean the sticks, chop them into pieces, bag them in portions and freeze them. Freezing and defrosting softens the rhubarb partially but is fine for cooking.

If you want to make some rhubarb and apple sauce year-round, freezing is the only option as shop-bought rhubarb is seasonal.

Force grown rhubarb from the so-called ‘Rhubarb Triangle’ in Yorkshire is a premium variety available from January to March. Forced rhubarb gets very high praise from top chefs for its superior taste.

It’s quite expensive and available direct from growers like Alston Wholefoods. 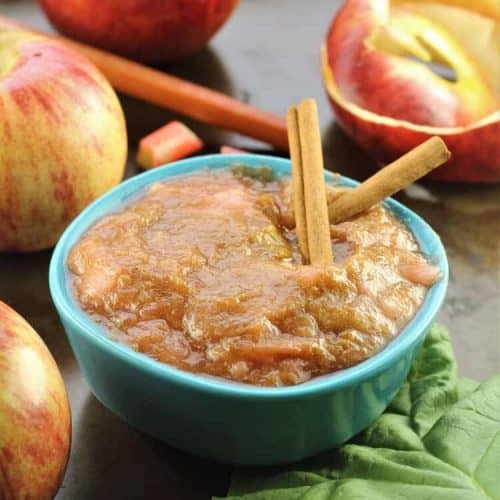 Apple and Rhubarb Crumble
No ratings yet
Use up any glut of rhubarb with an easy to make crumble.
Check out this recipe